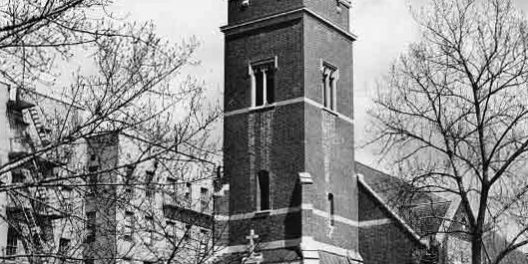 The Church of St. Mark was founded in 1835 in the village of Williamsburg which was then a suburb of Brooklyn.  The first service was held by the Rev. William Morris D.D. in the police courtroom of the village.  In October of 1837, the parish was incorporated and admitted into the convention of the Diocese of New York.  The first church was a frame erected on South Fifth Street and Bedford Avenue, Brooklyn in 1837.   The Rev. Samuel C. Davis succeeded Rev. Morris, however his ministry briefly ended in 1839 due to ill health. He was followed by Rev. Samuel Moody Haskins D.D.. He was described as a “great saint of God, devout Priest and Doctor of the Church.”  He served God and his congregation for sixty-one years, from 1839 to 1900.

In 1841, a Tudor gothic style stone church was consecrated by the Rt. Reverend Abram Newkirk Littlejohn, D.D., Bishop of Long Island. In 1897, the Church of St. Mark was relocated to its present site on Brooklyn Avenue and Union Street to make way for the Williamsburg Bridge.  In April 1900, one month after the death of Dr. Haskins, the Rev. John D. Kennedy was made rector. He had been the assistant since 1891.  The date of the cornerstone of the present building is 1900. However, other historical accounts give the date as January 1901.  It was the first church of any kind in the neighborhood.  Rev. Kennedy served as rector for seventeen years, from 1901-1918.

He was succeeded by Rev. Arthur Charles, D.D..  During his tenure he raised a substantial endowment to renovate the chancel, acquire a new Austin Organ, and build a new front façade with a church tower. The Memorial Austin Organ was installed in 1933 with the Great Organ, the Swell Organ, and the Choir Organ components in place.  The Centennial celebrations also ushered in gifts that included: The choristers’ (winding) stairway extending the sacristy to the Haskins Room, now known as the choir room and,the beautiful stained-glass window above the altar with the adoring angels.  Rev. Charles served as the rector for thirty-five years and died at St. John’s Hospital on December 18, 1953.

The rector Rev. Heron A, Sam in September 1977, started St. Mark’s Day School with ninety children, ages three to nine. The school continues to be a core part of the Church’s ministry offering classes from nursey to the 8th grade.

In 1974, we installed 20 stained glass windows of traditional saints and contemporary “saints:”

ABSALOM JONES, first Black priest of the Episcopal Church and founder of the African Episcopal Church of St. Thomas in Philadelphia. His life, his faith, and his commitment to the cause of leaders, justice and self-determination is a testament to the human spirit.

ST. MONICA, the mother of St. Augustine, was born in North Africa. St. Augustine credits her with molding him into the great figure he became in Biblical history.

ST. MARTIN DE PORRES was born in Lima, Peru, South America. His father was a Spanish nobleman and his mother a freed black woman from Panama. He joined the Dominican Friars and dedicated his life to caring for the poor and the animals.

HARRIET TUBMAN, born a slave, became the famous conductor of the Underground Railroad leading hundreds of slaves to freedom. She is referred to as “the Black Moses”.

THE REV. DR. MARTIN LUTHER KING, JR. led the Civil Rights Movement in the United States from the 1950 until his death in 1968. He received the Nobel Peace Prize.

MARCUS GARVEY, a Jamaican born Black Nationalist who created the “Back to Africa Movement”

At the 150th Anniversary the church underwent major internal renovations to the organ and chancel.   Many of the renovations were careful to use the existing components to preserve the original character of the church, including the new mezzanine built in 1991, the columbarium and the Tree of Life

RECTORS OF THE CHURCH OF ST. MARK